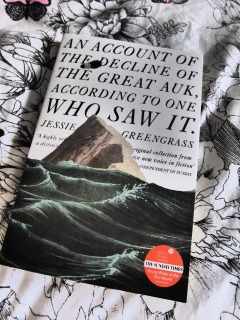 The twelve stories in this startling collection range over centuries and across the world.

There are stories about those who are lonely, or estranged, or out of time. There are hauntings, both literal and metaphorical; and acts of cruelty and neglect, but also of penance.

Some stories concern themselves with the present, and the mundane circumstances in which people find themselves: a woman who feels stuck in her life imagines herself in different jobs – as a lighthouse keeper in Wales, or as a guard against polar bears in a research station in the Arctic.

Some stories concern themselves with the past: a sixteenth-century alchemist and doctor, whose arrogance blinds him to people’s dissatisfaction with their lives until he experiences it himself.

Finally, in the title story, a sailor gives his account – violent, occasionally funny and certainly tragic – of the decline of the Great Auk.

Jessie Greengrass was born in 1982. She studied philosophy in Cambridge and London, where she now lives with her partner. She is a founder member of the Brautigan Free Press, and has appeared on London Fields Radio’s Page One talking about the work of Dorothy L Sayers. She has a great love for detective stories, and knows who the murderer is in almost every novel Agatha Christie ever wrote.

I have often found with short story collections that they all leave me feeling a little cold and wondering what the point of them was – there was none of that after reading this astonishing collection from Jessie Greengrass!

There are 12 stories contained and I only found 2 of them a little harder to get along with, but the others were such high quality and beautifully written that I often found myself nodding in agreement with sentiments, situations and messages gleaned from each story.

They are set in a variety of locations and bring up a number of subjects such as loneliness, grief, nature, childhoods, relationships – and I found that they made me think in different ways about the way I look at things.

The ones I struggled with were the ones about Theophrastus and Knut as I really didn’t ‘get’ them but I will be re-reading them in the hope that maybe in a different frame of mind all will become clear!   This is definitely a short story collection that I’ll be happy to dip in and out of again in the future!

Thankyou to the publishers and BookBridgr for an ARC of this stunning book.