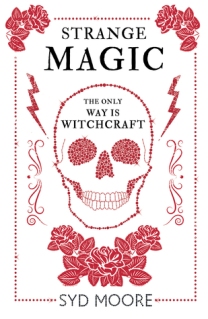 Rosie Strange doesn’t believe in ghosts or witches or magic. No, not at all. It’s no surprise therefore when she inherits the ramshackle Essex Witch Museum, her first thought is to take the money and run.

Still, the museum exerts a curious pull over Rosie. There’s the eccentric academic who bustles in to demand she help in a hunt for old bones, those of the notorious Ursula Cadence, a witch long since put to death. And there’s curator Sam Stone, a man about whom Rosie can’t decide if he’s tiresomely annoying or extremely captivating. It all adds up to looking like her plans to sell the museum might need to be delayed, just for a while.

Finding herself and Sam embroiled in a most peculiar centuries-old mystery, Rosie is quickly expelled from her comfort zone, where to her horror, the secrets of the past come with their own real, and all too present, danger as a strange magic threatens to envelope them all

Any book that has a link to Essex and witches instantly catches my eye, and the stunning cover also helped draw me towards this book and it has been a really enjoyable read and a little surprising too!

This is the story of Rosie Strange who is an Essex girl and benefit fraud investigator, with very little interest in the world of Witchcraft! But her life plan changes somewhat when her Grandfather Septimus leaves her his beloved Essex Witch Museum.  Her family was never the closest so she knows very little of this side of the family and when she travels to visit the museum her plan is to sell it as soon as she can!

But while she is there, she is immediately swept along in the hunt for the bones of one of the most notorious ‘witches’ of the 16th century, Ursula Cadence.  Sam who is the curator of the Museum and a friend of Septimus is wary of Rosie to begin with but their relationship is allowed to progress nicely in this book as they are sent all over the country to track down the whereabouts of the remains of Ursula to try and help the young boy whose body appears to have been possessed by Thomas, the son of Ursula.

I really enjoyed the mix of humour, history and mystery in this story and there were a few moments to give you the chills as well!  There was a fascinating glimpse into the history of Witches in the county through Sam and the knowledge he brought to the ‘team’ and it has definitely made me more intrigued to read up even more about what happened during that period. Very pleased as well to know that this is the beginning of a series of books featuring these characters so will be watching out for the next installment!

This book has been inspired by Ursula Kemp who was tried in Essex in 1582 for witchcraft and hanged, and then the remains of 2 women were later found in a garden in St Osyth and became a tourist attraction, such is the appeal of the history of the witches of Essex.