When two strangers end up sharing a cabin on the Trans-Siberian Express, an intense friendship develops, one that can only have one ending … a nerve-shattering psychological thriller from bestselling author SJI Holliday

Carrie’s best friend has an accident and can no longer make the round-the-world trip they’d planned together, so Carrie decides to go it alone.

Violet is also travelling alone, after splitting up with her boyfriend in Thailand. She is also desperate for a ticket on the Trans-Siberian Express, but there is nothing available.

When the two women meet in a Beijing Hotel, Carrie makes the impulsive decision to invite Violet to take her best friend’s place.

Thrown together in a strange country, and the cramped cabin of the train, the women soon form a bond. But as the journey continues, through Mongolia and into Russia, things start to unravel – because one of these women is not who she claims to be…

A tense and twisted psychological thriller about obsession, manipulation and toxic friendships, Violet also reminds us that there’s a reason why mother told us not to talk to strangers..

Seeing these characters evolve and show their true colours throughout this book has been the icing on the cake for me in this very twisted thriller, and although it might have put me off ever going off on back packing holiday on the Trans-Siberian express, I’ve loved every single minute I spent on this ‘journey’!!

Carrie is travelling alone around the world and has a spare ticket for the Trans-Siberian Express, so when she meets Violet, another lone traveller, it seems that fate has brought them together. They seem to share the same sense of humour and outlook on life so it seems the perfect plan for both of them! But what should be the perfect trip soon turns to something a wole lot more sinister and that darkness kept me turning the pages to discover just how twisted the outcome would be!

We get to see the emails that Carrie sends to her friend Laura back home, telling her of the experiences she’s having and the new friend she has met along the way. And Violet just seems besotted with her first impressions of Carrie – she seems to have that kind of ‘can do’ attitude that rubs off on all those around her, and even when some of the stops along the way aren’t what Violet imagined Carrie being part of, she goes along with it and there are many very’ interesting’ experiences and characters that they meet along the way!

And then it all starts getting messy! You get drawn in by the darker thoughts that Violet seems to have – past experiences and encounters!, and even she becomes a little shocked when Carrie starts to act irresponsibly so you’re never really sure which girl is the worst influence on the other.

As a fly on the wall with these girls, you are really never sure where the story will take you next and the twists along the way were really shocking! The hints and teases of darker thoughts are really cleverly played and just when you think you’re getting a handle on how the story will play out then bang, you’re wrong!!

If you love your thrillers slightly twisted and a little bit messed up, then this is the book for you! Really enjoyed it! 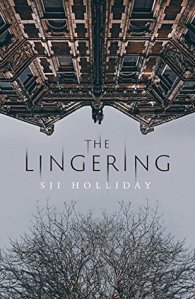 Married couple Jack and Ali Gardiner move to a self-sufficient spiritual commune in the English Fens, desperate for fresh start. The local village is known for the witches who once resided there and Rosalind House, where the commune has been established, is a former psychiatric home, with a disturbing history.

When Jack and Ali arrive, a chain of unexpected and unexplained events is set off, and it becomes clear that they are not all that they seem. As the residents become twitchy, and the villagers suspicious, events from the past come back to haunt them, and someone is seeking retribution…

At once an unnerving mystery, a chilling thriller and a dark and superbly wrought ghost story, The Lingering is an exceptionally plotted, terrifying and tantalisingly twisted novel by one of the most exciting authors in the genre.

Blimey that was rather brilliant!! And creepy AF!! I think the moral of this story is ‘trust nobody’. Oh, and don’t ever take a bath…….ever, ever again!!!

The Lingering is a (very!) twisted supernatural crime story. We are introduced to Jack and Ali Gardner who decide to leave their old life behind to begin again at a self sufficient commune. The village they move to has link to witchcraft and the locals are well aware of the stories and history. Even Rosalind House where the commune has set up used to be a psychiatric home – so the level of creepiness around the area is bound to be high!

The move is equally liberating and terrifying for them both. But it’s Jack who seems to settle into the routine of life there quicker than Ali. She seems permanently on edge around the others and reluctant to fully embrace the commune life to begin with. She seems quite an insecure personality and doesn’t like to be left alone, whereas Jack is happy to throw himself into various projects. It becomes clear they have moved here to escape things that have happened in the past – never an easy thing to do.

Angela is one of the commune residents and their resident ‘ghostbuster’! She’s determined to capture spooky activity on camera and she is equally wary of the new residents but goes out of her way to be friendly. Something that isn’t always reciprocated.

There’s also flashbacks throughout to a journal from 1955 from a Doctor who worked at the hospital and witnessed some very strange things and these really added another element of interest to the storyline.

There are a number of weird goings on at the commune, strange sightings and your interest is continually raised trying to work out why these things are happening and if any of the rumours are true! I found myself constantly on edge as the darkness of the story increased and with an extremely chilling ending it just rounded off a wonderful but disturbing read!!

Join 5,633 other subscribers
Follow Books and Me! on WordPress.com